FRUGALIC is blockchain based marketplace for all edevices where the devices self-list when devices's owner demands it. No such appliation exists to day. Neither ebay nor craigslist nor anyone else we know of allows this type of capability behooving to be present in todays self aware Internet of Things eCommerce. If you ever listed anything on ebay you may know what pain it is to have to create a listing. What if this listing could self create letting the device self list? We are not a vaporware project. We have built and tested a lot of our software already and the listing experience and ease of use it offers transcends anything you may have experienced when listing any cellphone (or edevice) on ebay! FRUGALIC is building a shared, universal ledger designed to track ownership for the world's digital hardware assets around us - and those there are way more than people on facebook yet there is no repository for all devices like there is for human profiles. The ledger also contains data about device technical characteristics thus fingerprinting them. It ledgers devices, their specs, their owner email, not humans. 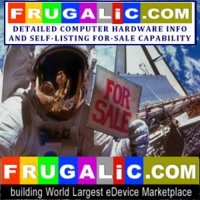 You will not find some crazy conjured up PDF white paper here with crazy predictions. We want all to be as simple as possible. Think how many more devices there are in the world than people. Think of frugalic as largest repository of devices. Just like Facebook is for people, Frugalic is for devices. Frugalic is striving to accomplish utmost simplicity in populating a blockchain based edevices marketplace surpassing in simplicity of use (yet technical sophistication) those of centralized ebay/craigslists/amazon marketplaces. The project will be using a blockchain based distributed database AND a unique automated method and apparatus for the procurement/obtaining of information about sell-able tangible electronic items called in a generic manner: edevices. No need to manually describe them like dead penz-dispensers that ebay allegedly started with. Think about the valuation of Facebook eBay or Amazon. We are right in their space yet making all devices self list their profile identifying their user when the user demands it.

BASIC PRINCIPLES AND SCENARIO OF USE

FRUGALIC blockchain based technologies are intended to enable searching for and AUTOMATIC listing - potentially billions of dollars of electronic items such as android and ios devices and laptops in a blockchain. There is no need to craft listings like on ebay. frugalic is like a facebook but not for human profiles but rather edevices with devices listings containing owner email as its major attribute. You do not need to manually create profiles for the edevices - the devices do that themselves and insert their profile data into the blockchain alongside owner email. In Facebook, it is human elaborate interaction and profile crafting that results in a listing/profile. Special frugalic software downloaded form google Play store or Apple App store allows the devices to self list and create a blockchain based entry that depicts the devices along with their current owner emails. You can search and look for devices that are for sale as well as you can review prior ownership of a given device. 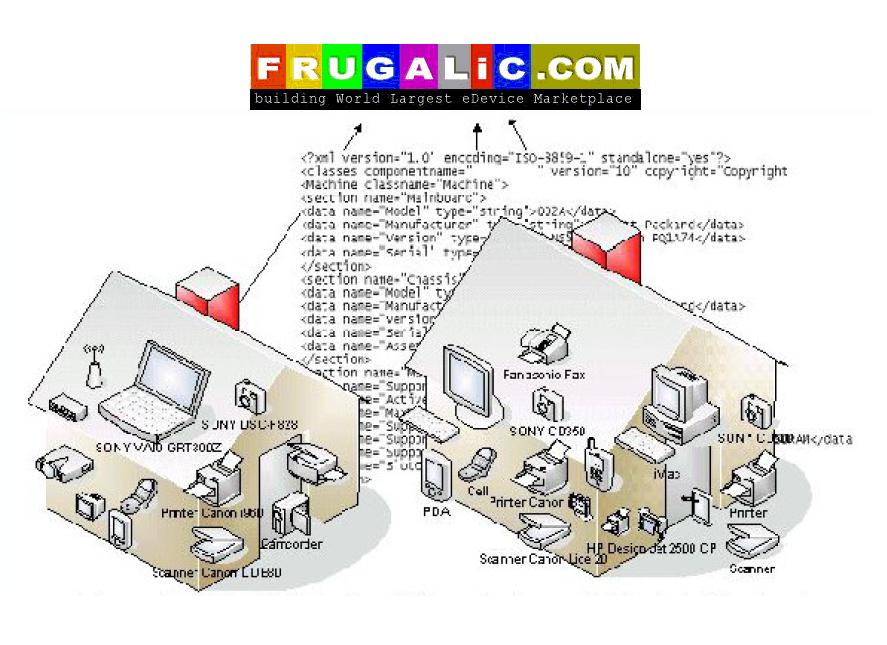 Items that frugalic technology can easily identify and list with EXTREME PRECISION and ACCURACY include billions of dollars worth of: All you need to do is make sure an app is downloaded from corresponding store and you just press the button and specify your email as the owner of the device. Frugalic self listing technology is based on Link to patent https://www.google.com/patents/US20050114505 Below is a ready android based alpha version of client that is to list device self-described information and insert it as a listing into frugalic blockchain. Autonomous device-demand driven listings. No manual authoring of a listing is needed like on ebay. Additionally info about device owner and contact email is injected into frugalic blockchain. Devices can be searched via different web clients clients that look at the frugalic blockchain. 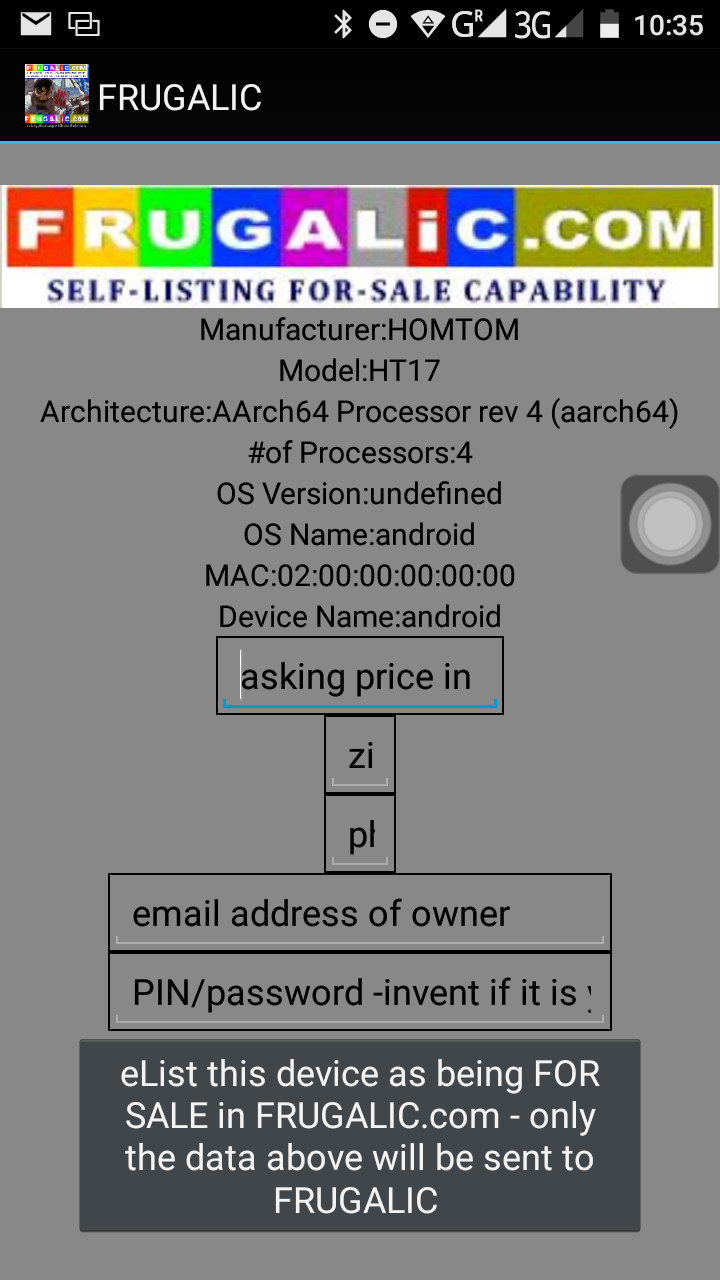 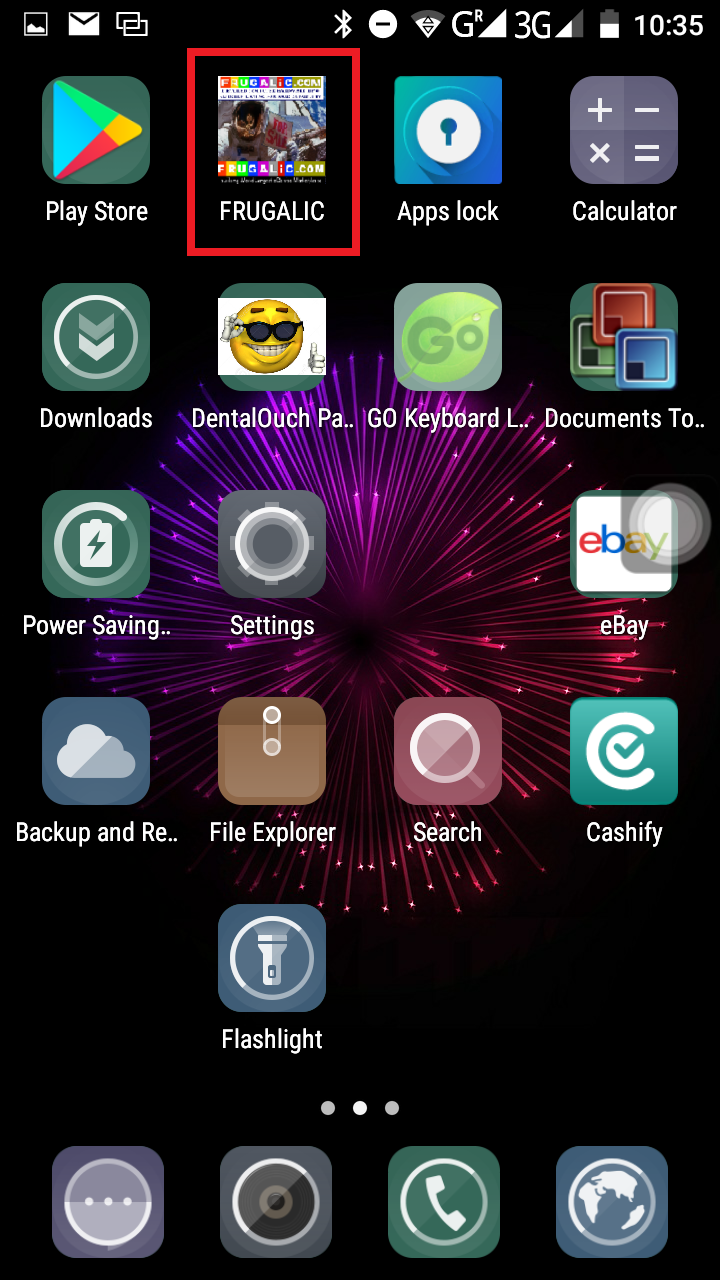 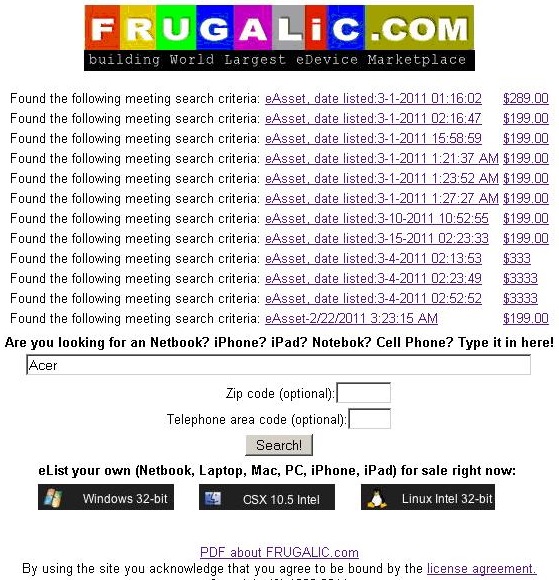 It is hard to take off to compete with ebay/amazon/craigslist- we will be looking for people to join and build this simple yet challenging landscape - if you would like to assist us with a non binding donation (as we do not know if donations can suffice to support what we want to accomplish so it would be irresponsible to promise anything in return at this point)- a few person small team that quit they daily jobs - to launch and prepare for an ICO please consider assisting us in BTC or ETH to: 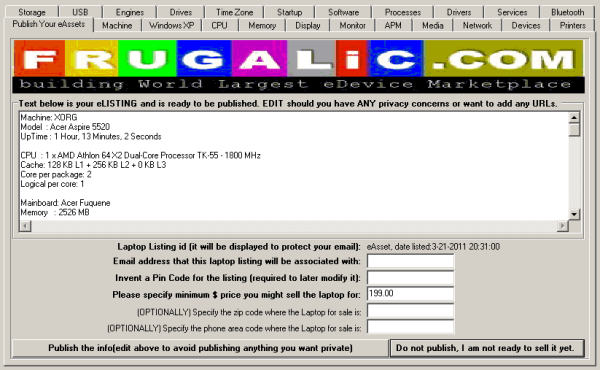 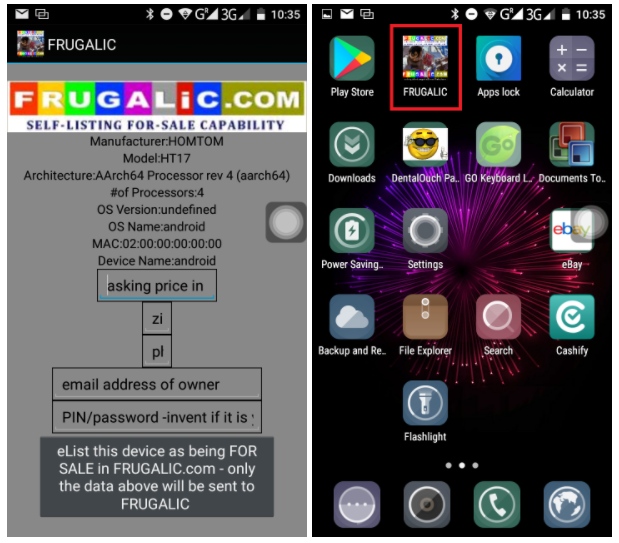 Team
Frugalic is founded by a team of VP/Principal Software engineer and Silicon Valley native tech veterans to have worked for, at or with the technology the following companies in Silicon Valley California:


Some of our patent work is located here along with information about one of the founders to have built the initial patents for frugalic and to have later worked at eBay.com and as VPs or Principals at prestigious Silicon Valley comapnies. In the spirit of bitcoin we believe in hard work and low profile, so we would like those considering buying tokens to consider merits of the project rather than look for rolodex names generating hype.
Link to patent https://www.google.com/patents/US20050114505
Link to patent https://www.google.com/patents/US20050177387
frugalic@frugalic.com
POB 335
Livermore, CA 94551-0335
Terms and Conditions
Copyright (C) 2017